Sunday 21st October dawned with clinging fog but with a small promise of becoming brighter.  Regardless of the weather we had decided as our trip to Germany had been postponed due to circumstances beyond our control we would have a day out.

Witley Court and Gardens are only 45 minutes from our home so are quick and relatively easy to get to, via a number of motorways and a variety of minor roads.  I had intended we set off early but as usually it didn’t happen, I suppose I should have learnt by now, but I suppose if we had gone early the fog would have still lingered.  As it was we found numerous trees draped in clouds of cobwebs encrusted with diamond-like water droplets just waiting to sparkle when the fog lifted.

I managed to take some really quite good photos, some of which are above taken with my small compact Nikon digital camera as big son was using my Fuji and little son my Panasonic Lumix.  Husband was using his new Olympus, which is able to take panoramic and 3D shots without the help of Photoshop to create the magic.

The photo with the spiders shows the fog just starting to lift.

We had a great day out which was enhanced by enjoying a light lunch at the tea room just outside the gardens.  It was so nice we didn’t need our Sunday dinner when we got home.

This fabric was purchased from Jo-Ann’s in Spainish Fork (I think) Utah, it was our second trip there of the day!  My aunt kindly gave me the pattern book as we were unable to find it in the store nor on the UK Amazon site, so she bought another one for herself from the US Amazon website.  So this afternoon I will be making one of these up the purple one I think for the first one.

Saturday 12th May saw us take a trip into Provo (I think) to Costco for supplies for the family barbeque next day – America’s Mother’s Day.  We went via a pizza restaurant, the pizza is prepared in front of you and left to cook whilst you pay, fetch your drink and get a seat, once cooked it is delivered piping hot to the table and it was of a normal (British) size too, so I managed to eat it all! Yummy! 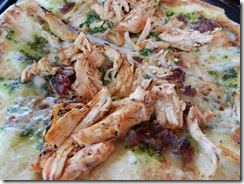 The trip to Costco was fun too.  In the queue to pay, a poor, unsuspecting man was standing quietly waiting his turn to pay, when he gets accosted by this round, over friendly Brit, who wants to know if he really intends to give his mother a bag of bread rolls as a gift on Mother’s day.  The poor man didn’t stand a chance!  We had 2 big trolley (cart) loads in front of us and another man, who sensibly had a big bunch of yellow roses in his hand and it turns out my aunt knew; so this poor man was getting it in the neck – nicely- from me about not buying his mum or wife a bouquet when the second man joins in too, to the extent of offering to buy me a bouquet too!  By the time we get to the check out the first man decides he had better go and get a bouquet too and comes back with the very one I would have chosen for myself!  Hurray it worked – we both agreed we could dine out on this story for sometime to come.

After witnessing what must have been a very embarrassing exchange for my Aunt and Uncle we got the shopping into the car to return to Mapleton; we went via some properties that my Uncle had worked on, the campus of Brigham Young University and a park up the side of a mountain with camping facilities, a water park which was closed as the season wasn’t yet open and finally a trip round the posh end of Mapleton – this is where the house envy starts and some of them were in a state of demolition and/or refurbishment or neglect – I could have quite easily taken them on but then what would I have done with all the room and just think of all that extra cleaning.  Cleaning I still don’t understand the concept of that yet!

Have a look at some of my house envy moments.

Whilst I’ve been away the much needed rain has delivered its benefit to my garden.  The plants all look healthy, except the slugs have been busy on my Canterbury bells (Campanula).  the oriental poppies are slow to flower this year but there is plenty of promise from the self seeded nasturtiums and of course the strawberries – yum!

Sadly, I have returned home now, leaving my amazing American family 7000 miles away – I’m coming back in August be warned!

The following photo’s where taken on the return from my cousin Kate’s home in Blanding in the south east of Utah.  Again the rock formations are astounding and the resident of Wilson’s Arch did enjoy the Doritos we fed to him.  Oh don’t miss the horses face that appears  naturally in a tree formation on the side of the hill.

On our trip we visited an Indian Trading Post where I was able to take photo’s of some of the art work; all of which would make excellent quilts – sometime in the distant future!

We then carried on to Gooseneck National Park, just as good as the Grand Canyon but only a mile down.  The bends in the river so look like they are from the Burt Reynolds film Deliverance but that was supposed to be set in the Appalachian Mountains.  A walk down would be good but not in flip flops, without water, walking sticks, a hat or sunscreen!

The Indian woman in the car, Julia Halliday, was making and selling jewellery which of course I had to buy (Dear Daughter please don’t read this as you will know what your present is)

More from Arches National Park.  Balance rock.  The scale of these rock formations is very difficult to portray via imagery you need to be here!